No, not that one. The other one. The one by the singer who used to be an adult film star, until she briefly told us all about naughty girls needing love, too. This one.

I get paid in AquaNet.

Oddly, the guy who gets almost as much screentime in this video as Samantha Fox is her keyboardist, whose fringed jacket is rivaled only in “Can’t Buy Me Love” for its fringiness. But he’s an adept spinner, isn’t he?

I don’t really play the keyboard. I just spin in front of it and hit the “o noise” button.

Well, I DID have to pee.

So moved by the wandering punk, Samantha takes a moment to coach us on proper orgasm-faking, because one can never be too good at that, amirite, Lerlines?

Who stuck that mic up the hole in my jeans? Steve!

It worked for David Lee Roth.

…and then cools off with a tabletop fan beside from the stage, drinks some water, and throws it in her guitarist’s face.

You should see what else is on her rider.

Happy Labor Day, folks! And happy belated birthday to the other Samantha in my life, who, to my knowledge, has never done any of the things in this video, except probably sing the song whilst wearing a denim jacket.

When That Perfect Girl Goes

Last, we were watching the “Beach Ball” episode of Bubble Guppies, a little romp in which Cinderella’s a bartender lobster at a beachside cabana, and her name is Sandy. 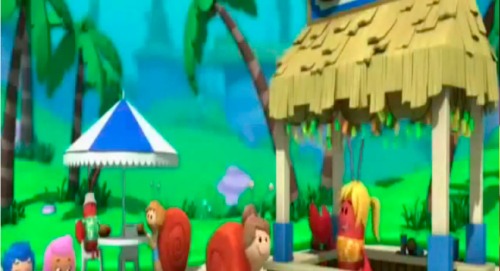 The evil brunette lobsters don’t want her to go to the Beach Ball.

Bartenders are SUCH low-class lobsters!

As the episode commenced, we had this conversation.

Five-year-old: “Sandy is that girl in the real-people movie. Grease.”

FYO: “She was good except when she went all curly-haired and wore black. That was weird. Why did she do that?”

Good thing Rizzo’s my size, or these pants would be even less comfortable.

Me: “Well, that was weird. Because she was trying to be something she wasn’t for a boy.”

FYO: “But maybe she really liked that.”

Hmm. Maybe what I really need is a home perm from a Lock of Fury dropout.

It reminded me of a blog (to which I will not link) on Slate, I think, where the writer had deep reservations about Elsa’s makeover at the end of “Let It Go.” It sexualized her, it said, and it also was expressing that for a girl to get her power, she has to have a slinky little walk and let her hair down in a way that the boys will totally love. (This writer also said the song is setting up Elsa to be the film’s villain, which makes me wonder if we watched the same movie.)

She’s here. She’s fabulous. Get used to it.

After two theater viewings, multiple DVD viewings and countless “Let It Go” YouTube replays, I have come to the satisfying conclusion that Elsa got into her bangin’ slink-dress because she could. She spent her whole life barricaded away by sucky parents, her hair all scrinched up on her head, wearing giant regal dresses that probably weighed a ton, covering up every bare inch of her body so she didn’t accidentally shame the family with her horrible secret. So what’s she do when she busts out of that? Gets herself a light, flattering, dramatic gown that allows her freedom of movement and doesn’t make her feel like a prisoner in her own body. I’d have done it, too. In fact, I did do it.

Elsa’s physical manifestation is her final fuck-you to her parents and fear: I will be who I want, do what I want, and I will look how I want to look. She’s not just exhibiting her talents, she’s wearing them out there, plain as day. It’s the equivalent of the emo teenager finally having the nerve to wear eyeliner to school, the man who finally busts out the high heels, the woman who realizes she can wear anything she fucking wants because it’s her body, and she can.

So I offer my sincere apologies to Sandy. I’ve been slut-shaming you all these years, and it took a five-year-old to expose it. You wear whatever the hell you want. After all, I never judged Danny for lettering in track. Shame on me.

Thirteen years ago to this day, a college friend of mine took me to a party next door to the most pretentious grocery store in San Francisco, where I met fellow SlumberPartyMovians Melinda and Karen.

It was a Bastille Day party. Melinda was bent over her oven, pulling out a tray of French fries. I mentioned that they were Fronch! Fries! And she said she also had Fronch! Toast! And Peru! And an epic friendship was born.

It wasn’t until about two weeks later, when Karen said “The Chauffeur” was the sexiest Duran Duran song ever, that my official self-adoption into their family was complete, but suffice to say: June 2001 was a very good month.

A mere six days after Shindancer’s beautiful post about her Louise (and my grand-Louise) we got some pretty crappy effing news from a bunch of old men who think that it’s OK for some purveyors of cheap Chinese sparklies to break the law and not provide their adult female employees with Plan B, because the science in their brains says the morning-after pill might destroy a future Christian of America.

Thus followed a few days on Facebook wherein folks longed for the beauty of ten years ago, back before all this partisan rancor, when we were all aligned against the terrorists and everyone was afraid to mention maybe there weren’t WMDs in Iraq, and gays couldn’t get their icky marriage all over our government, and “changing the conversation” wasn’t anything women talked about, because it was before a couple of criminals in Steubenville thought it’d be totes fun to sexually abuse a girl and then like txt it all over, and the town was all, “But football!”

Darn we the people and our pesky voices.

One wonders if back in the chambers, this video maybe plays on repeat, all the time, with the Quintet of Contraception nodding along with Mr. Man, and then sighing mournfully at the end and the hysteric hyperbole of the womenfolk.

Meanwhile, Salt, Pepa, Spinderella and the guy in the hat were freaking in the next room.

Salt n’ Pepa might disagree, but this week, in my heart, there’s only one true judge, and that’s Ginsberg.

** I know it’s not Friday. But tomorrow is a holiday–the birthday of our great nation! So it’s a holiday Friday.

We lost a member of the SPM extended family this week. I didn’t know him, but I know his delightful wife and you know his stepdaughters quite well. While this selection is not our SPM generation, it qualifies for our kids’ generation.

And I think Ken would dig it.

Mel Brooks: The Gift that Keeps on Giving

For roughly the umpteenth thousandth time, I pulled out “The Producers” on Saturday for an afternoon viewing; my husband bemoaned that I ALWAYS do that, but I told him I’d turn it off as soon as the Gene Wilder scene was over.

This, I believe is the first time I’ve watched it since we got a giant flatscreen TV, and given that I know most of the lines, what does one do but begin looking closer at the sets? At one point “Hold Me, Touch Me,” is cowering from Bialystock, and there’s a clear shot of one of his many playbills, this one for a show called “Baby Wants A Kiss,” and featuring a parrot with lip-eyes in the graphic.

This is where I jumped off the couch and reached for my phone. Why? Because the runaway smash Broadway hit “Baby Want a Kiss” starred none other than that epic Hollywood couple, Baol NewmanF and Ooane Moodward.

The supporting cast seems to be a few afterthoughts of tape, possibly named “Bob Gunk”?

In any case, Frank Corsaro’s name is clear enough, so one quick Google search later, and a visit to the Internet Broadway Database later, and there it is: Baby Want a Kiss,which ran for 148 performances in 1964, and starred two other schleps named Paul Newman and Joanne Woodward.

I wonder if Baol and Ooane know about them. Paul and Joanne don’t seem too bothered by it. 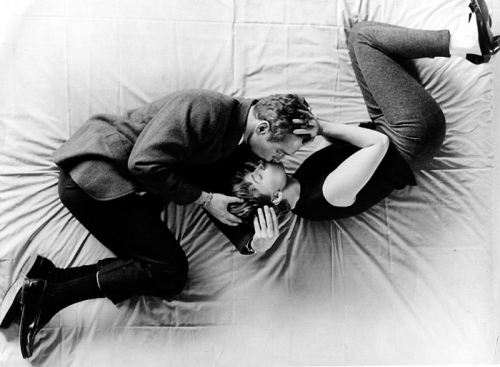 Here’s why getting older sucks: people you love die. And they die more frequently. And even celebrities, who you don’t really “love,” but with whom you’ve developed an important one-sided relationship over the course of your life, also die.

That’s pretty much all I can say about it right now. I have a meeting in five minutes and I have to go pretend I’m having an allergy attack.

To celebrate love, I give you the most unabashedly happy song ever performed, and an excellent example of that stepchild of love songs: the long-distance love song.

I have a running list in my head of long-distance love songs, and it’s time I got it down onscreen. Please add to the list.

The comedy world, and SlumberPartiers everywhere, have lost a great today: Sid Caesar, who went on to meet his final pratfall at the ripe age of 91.

Before he hammed his way into Slumber Party history as Coach Calhoun of the Rydell Rangers, he was a go-to guy for hilarity all around. He was in The Club–the Shecky Greenes, the Mel Brookses, the Eve Ardens, the Carl Reiners, the Imogene Cocas–they were all stupendously funny in that slapstick-meets-one-liner-meets-subversive way. (If you don’t believe me, get “It’s a Mad, Mad, Mad, Mad World” on your Netflix.)

But back to the Party. I had a ridiculously difficult time find the infamous “rip’em” speech from Grease, and this is as close as I got.

But the real gem in Grease is, of course, the scene in which he introduces the sweetly vulnerable Danny Zuko to all the sports possibilities available to him, starting with the great advice of cutting smoking “down to two packs a day.” After ticking through every spring sport available (with Danny adorably not knowing basketball requires dribbling, which is an indication of how little ESPN they had in 1957) Coach Calhoun recognizes he needs to be alone. Like really alone. Like looooong-distance-running alone.

Yeah. That could be cool.

Ring that victory bell, Coach! Just like you always wanted to.

David Bowie is 67 today, and we all can agree he’s probably still sexy in big hair and tight pants, n’cest-ce pas?

if you’ve already read our Nomi Blue Book Labyrinth post, then head on over to Tor.com for an excellent review of Labyrinth.