Prince: Tonight, You’re a Star. And I’m the Big Dipper.

Man, this year has sucked.

Every post we’ve done in 2016 has been mourning those we’ve lost–and the last post was bidding farewell to Vanity, one of Prince’s girls. I admitted in that post that I’m not as much of a “Purple Rain” film aficionado as my fellow Lerlines (who I hope will be able to fumble through their sparkly tears to share with us their favorite moments, again), but I did love Prince. He fell squarely into the David Bowie he-makes-me-feel-funny sensual attraction, with the same androgyny, beauty, slender build, and eyeliner.

“Purple Rain” was part of the soundtrack of my childhood, but by the time I actually passed my David Bowie-induced puberty, and hit high school and college, Prince had pulled together the New Power Generation and released some of the best dance singles to come out of the early 90s (and there were a LOT of dance singles). Nothing got my ass on Bubba’s dance floor faster than “Seven.” Seven was bizarre and fantastical, and kind of religious and sort of made no sense, and goddamn, was it a hip-grinder that got the pelvic regions in contact with other pelvic regions? Yes, yes, it was. I’m pretty sure anybody who danced to “Seven” can say they got to second base.

There was also “Cream” and “Diamonds and Pearls.” But the Prince I really loved? That was the Prince whose songs were the opposite of metaphorical. The AppleJack-honest, in-your-face, “I am a sexy muthafucka,” THIS SONG IS UNQUESTIONABLY ABOUT THAT THING THAT ALL OF MY SONGS ARE ACTUALLY ABOUT.

What other song so effortlessly ties together a hip-thrusting bass line, rap, hip hop, soaring vocals, and James Brown funk? What other song has lyrics that are both domineering (“Now bring your big ass round this way so I can work on that zipper, baby”) and submissive (“I’ll only call you after if you say I can”)? It’s celebratory (“I like ’em fat! I like ’em proud!”) and insulting (“You better be happy that dress is still on. I heard the rip when you sat down.”).

It compares stripping down a woman to opening an ALMOND GODDAMNED JOY. (Did anyone ever see him eat a candy bar? Or video it? Please, share. The world needs that now.)

What other song so perfectly personifies Prince that he can say, straight-faced and OMG you giggle but you SO BELIEVE it: “Tonight, you’re a star. And I’m the Big Dipper.” (Nananana! Nananana!)

So let’s walk through the video. Note: the screenshots are VHS-blurry, so I recommend watching the video carefully, several times, to fully internalize its majesty.

Diamond and Pearl are auditioning for something. Diamond is wearing one of the best baby doll dresses ever to come out of the 90s, and good god, I still want to wear it all the time. (Halloween costume idea!)

Diamond wants the gig and is all in. Pearl ain’t so sure, especially after Diamond gives her a fake name.

The double doors open, and… 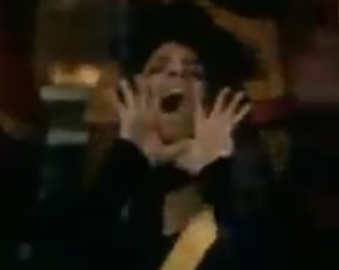 Diamond, of course, knows what her biz is and runs right up to Prince to start in. He enjoys it. And we cut over to Tony M, with amazing hair. He’s wearing what seem to be elbow-length black gloves. Why? I don’t care. His voice is butter. 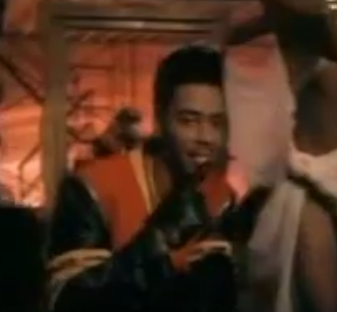 Yes, you can call me after.

(BTW: I cannot adequately express how excited I am that this hair is coming back. One of my first-grader’s classmates has a high-top fade and I have to control myself from giggling and clapping every time I see him.)

THEN we cut over to the effortlessly majestic Rosie Mays, with a soaring voice and her fabulous refrain “Let a woman be a woman and a man be a man.” It could be ironic–when has Prince ever let those two things be distinct entities?–but we know what’s for reals: it means we have complimentary parts that fit together nicely, so let’s make them fit together nicely, shall we?

Has champagne satin ever looked so good? No, it hasn’t.

So Prince and Diamond get down for a bit, and we see all the gorgeous characters dancing all around… and then, “Oh, no, little cutie, I ain’t drinkin!” And he totally ditches Diamond and goes after Pearl, who seems mildly disgusted by the whole thing. So what’s he do? He strips her down like the ALMOND GODDAMNED JOY. That’ll teach her.

Parking meters sound uncomfortable, but in this case, I’ll make an exception.

Tacky and overeager as ever, Diamond runs up to try to win back his attention, and then darts off, pouting–which is when Prince throws the shade:

“Ha, toy, I don’t serve ribs. You better be happy that dress is still on. I heard the rip when you sat down.”

A few items of note: 1) Prince’s paisley crib is decorated with human furniture. 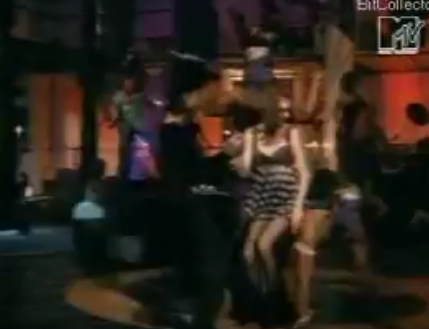 Have a seat on my humans. They like it.

Honey, them hips is gone.

Incidentally, that woman in the back is letting loose a gorgeous scream. I’m not sure if she’s laughing or horrified. Is she Pearl, and found a coverup? I’m not sure. The red dress makes the whole thing very Lynchian.

And then he gets down and the sex starts. All over. I’m not going to ruin it with blurry screenshots. Watch it, several times. Today.

7) The guitar. Always, always, the guitar.

Vanity, Tearing Up the Neon in Seventh Heaven

If you haven’t seen Berry Gordy’s The Last Dragon, stop reading this, go to Netflix, and educate yourself. I’m not kidding, Go. GO NOW.

OK, now that you’ve seen the finest example of Berry Gordy producing a kung fu musical set in Harlem,  we can pay proper homage to our dearly departed Vanity.

Vanity’s one of many women who fall into the “Prince protege” category, and she’s not much different than the rest. She was stunning, moderately talented, had legs that ended somewhere around her neck, and performed in a movie that’s adored by those of us who watched it to tatters in the 80s, and little understood by pretty much everyone else.

“Purple Rain” may have had Morris Day, but “The Last Dragon” had Shonuff. It also featured the line “Directa your feetsa to Daddy Green’s Pizza,” not to mention Faith Prince, who sang a series of hilariously bad music videos, including one called “Dirty Books,” which I thought until just now was actually called “Dirty Bugs.”

But we’re not talking about all that. We’re talking about Vanity, she who had absolutely  perfect skin, sculpted cheekbones, dancer’s legs, amazing hair, and a stunning smile. Her performances were all completely over-the-top, tempered with a comfortable magnetism that came through in every fabulous roll of her perfectly eyelined-eyes, every arch of her flawless eyebrows, every long-fingered Tina-Turner-like point at the camera. The concept that she hosted “Soul Train” was so convincing, I was always bummed she never actually had her own live dance show.

Alas, despite her magnetism and beauty (or because of it?), the 90s were not kind to her, seeing her through the crack addiction and subsequent kidney failure that eventually killed her a few days ago.

I hope your heaven is as amazing as Seventh Heaven was, and I hope you meet the Master in all his golden glory.

We were children of the 80s. We had cable, and we had VCRs, and we had parents who really didn’t give a fuck sometimes. And so we learned these songs young, and sometime later–maybe in college, when thinking about things that happened 10 years ago was suddenly cool, but before anyone called it retro?–we actually listened to the songs and couldn’t believe our parents let us listen.

Now that we have children, of course, we laugh and laugh when they think “a spoon up your nose” is a funny joke, instead of an actual spoon.

I was absolutely flabbergasted when I first moved to New York and realized Elaine’s was an actual place.

I still know the whole dance. I performed it for my toddler when we watched this back at Christmas. She clapped and said “Mommy’s dancing!” and my husband wondered if the material was appropriate.

When John Travolta talks about bowling at 1:43, the hand gesture he makes is totally not about bowling. It still makes me kegel.

We knew he said bad words like “tit” and “shit,” but my parents loved it so much that we listened to the album until it looked like a cat had attacked it. What I didn’t hear were the choice phrases “get off my rocks” and “pussywagon.” Additionally: if someone understands the Saran Wrap, please explain.

Two Things You Never Noticed About The Goonies

1. Mouth is wearing a Purple Rain shirt through the entire movie. (This was my favorite late-night movie trivia question. I totally stumped my sister on it once.) You would not have noticed this unless a) you watched the movie very closely so as to stump your sister on late-night trivia questions; or b) you are a writer on this blog, and noticed everything with Purple Rain on it.

2. Sloth is a Raiders fan. This is not surprising, as the late great John Matuszak was a Raider; in addition, it’s a pirate, for heaven’s sake, and this is The Goonies. But I’d never noticed he was wearing the t-shirt until last night, and I assume it’s because I’ve never before watched The Goonies in HD. (Five seconds of internet research told me this is an Easter egg, so you may have noticed it, but that would mean you look for Easter eggs and are an even bigger dork than I am.)

One last thing to mention: I just noticed something new in The Goonies. That alone makes it one of the greatest movies of all time.