Ed Lauter, esteemed character actor whose name you probably never knew, who was such a good actor who has been known as Susan’s dad from “Real Genius,” Murray from “Youngblood,” or Mr. Kelly from “Gleaming the Cube”… he was even in “Automan” back in the day (but who wasn’t?). Mostly, he was that Militaryish Tough Guy With a Heart.

The man was in 204 movies and TV shows. Seriously.

But you and me, we know him as Janie’s Dad.

He’s OK with her sneaking out of the house as long as it’s in pursuit of a job.

In his honor, I invite you to re-read my first-ever SlumberPartyMovies post, entitled “Slow, Slow, Quick-Quick Slow,” a treatise on why Girls Just Wanna Have Fun was the greatest 80s teen movie.

If you don’t have time for that, just watch this. Aw, Dad.

Dottie and Alix over at ModernKiddo.com always have terrific blog ideas, and since I have no inspiration this week for a Friday Morning Video, I’m going to spin-off their 15 Characters That Inspired Me idea, Slumber Party Movies-style. This is by no means a complete list.

1. Stef from The Goonies 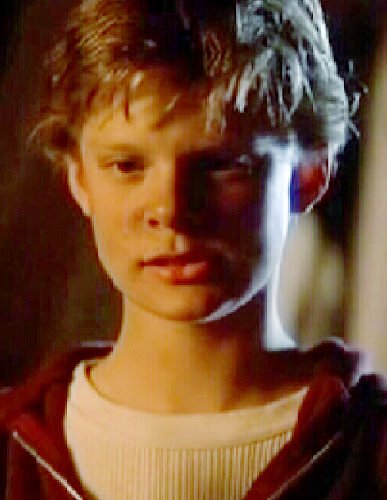 God put that rock there for a purpose, Brand.

Stef wore glasses, had short choppy blonde hair, and her BFF was the prettiest girl in school. She managed to mostly keep her cool, even after losing her glasses–I had nightmares about losing my glasses, literally–and in the end, got the funny guy in the Purple Rain t-shirt. Who wouldn’t call that a win?

No, I will not dance to Swiss-style lederhosen music.

She was a gymnast who broke the mold and danced to her crippled friend’s synthesized symphony, and then had gymnastic sex with Mitch fucking Gaylord.  I took acrobatics because of her. Until I hyperextended my elbow mid back-limber and said screw this, I’m done. What do you want? We can’t all be Becky Cameron. 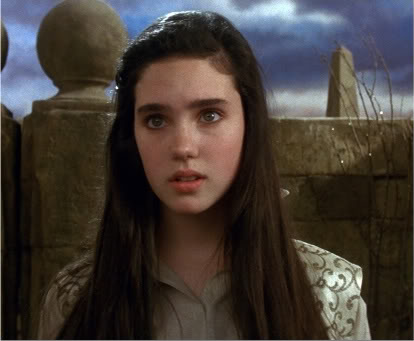 She’s a bratty teenager who sees her parents as abusive because they ask her to babysit when she doesn’t have other plans. But she also lives in a fantasy world where she’s a warrior princess, rescuing said baby brother from an overfamiliar Goblin King with a crush on her. It’s no secret: part of the reason I had children was so that I could pretend, again, that I’m also a warrior princess.

How DOES she do her tendrils?

I was a middle child who imagined myself to be far more persecuted than I actually was. Plus, I had short hair and was desperate for long hair. That’s pretty much it.

5. Blair from The Facts of Life

Blair, before she found Jesus.

By the time 1989 rolled around, I was 14 and feeling the impact of being the nerdy one in school. Then along comes Louise, who, it turns out, comes from a long line of witches, and can wish herself into being popular AND getting Dan Gauthier, plus she magicks her spunky BFF into SPM rap history.

Which brings me to Inspiration #6.5: the BFF. Look at how funky she is.

Meet me, if I were an even bigger geek.

Nearly every time I’ve watched this movie with someone, they’ve stopped midway through Jordan’s introduction, looked at me, and said, “She is SO you.” Well, sure she is. Except she’s twice as brilliant as I am (and that’s saying something), much better at building things, and can knit. Like, really, really well. 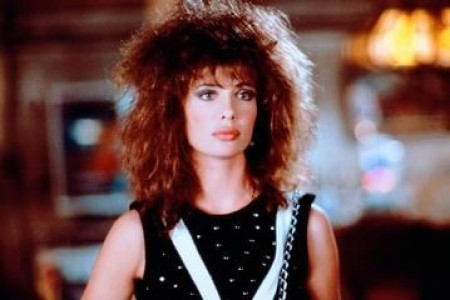 I’m not even justifying this with an explanation. But here’s one, in case you require one.

9. Lynn from Girls Just Want To Have Fun

Say it with me: Fair is fair!

Billie Jean kidnaps adorable geeks, defends her brother, denies an overgrown slug sexual advances, and inspires a nationwide movement to stand up for yourself. We could use some Billie Jeans these days.

That’s the start of my list. Add yours in the comments.

I’ve been dying to get in here and do some posting, but I’ve also been totally doing stuff. Like moving and working at a job where they pay me and everything. But I have been writing, I really have–I have the first four parts of a five-part series on Labyrinth mostly sketched out, for instance. That’s going to be epic–in the true sense of the word, involving quests and to-be-continueds and codpieces, not in the internet meme sense of the word.

I was hoping to get around to starting my Labyrinth series this weekend, but fate intervened. I took the girls* to lunch today at a local spot called Gullifty’s–nondescript from the inside, but family-friend (read: high chairs and crayons) and with surprisingly delicious food, including a homemade applesauce that my newly minted one-year-old nearly gagged herself on, in the good kind of toddler way. One of the reasons I love Gullifty’s is that they’re always playing an 80s XM station–probably 80s on 8 or something. Last time I was there, I heard “The Glamorous Life” while I was washing my hands in the ladies’. Today, as we entered, they were playing “Puttin’ on the Ritz” by Taco.

Halfway through our chicken fingers and cobb salad, this song kicked in.

To say I plotzed would be an understatement. The nice families eating their Friday fish were treated to a full-on chair dance, and Gillian even highchair-danced a little. I explained to my two-and-half-year old that Janie and Jeff won the dance-off to this song, even though they totally didn’t deserve it, except they did, and I realized that I had no choice but to blog about “Girls Just Wanna Have Fun,” the greatest 80s teen movie ever.

It is not the greatest movie, mind you. It’s not even the greatest slumber party movie. But it is the greatest 80s teen movie, because it manages to build in all of the requisites of an 80s movie, but it also includes Helen Hunt, a Solid Gold knockoff, and the guys from the “Total Eclipse of the Heart” video.

I know you’re wondering, so here’s a list of 10 80s Teen Movie Prerequisites. (Add your own in the comments.)

Brass tacks: Girls Just Want to Have Fun has it all, including a title ripped off from Cyndi Lauper’s biggest hit, and a cover of said song in the movie, probably because she’d already sold music rights to The Goonies and didn’t want to do it again. Let’s break it down, item-by-item.

You cannot, cannot, cannot have an 80s Teen Movie without one. Basketball games, football games, ski races, footraces, sail races, Battle of the Bands, dance contests: it is a must.
(OK, Footloose doesn’t have one, but it does have the tractor chicken scene, and it has a dance.) And the protagonist wins, beating…

2. A rich teenager with a rich daddy and rich toys
In “One Crazy Summer,” it was a Ferrari; in “Pretty in Pink,” it was James Spader, who, in the 80s, actually WAS a rich toy; in this one, it’s a remote control closet and an answering machine. She totally had her own answering machine IN HER OWN ROOM. Mind-boggling. She was even a debutante, for cripes’ sake. Which brings us to:

In Lovelines, they did the classic replace-the-science-film-with-boobies trick, but here, it was far more awesome. Handing out invitations to BrattyDeb’s coming out party to schlubs on the street? BRILLIANT. And why did the practical joke work? Because it involved…

Sometimes the punk was combined with the wacky friend (“Pretty in Pink”) or aliens (“Weird Science”), but in this case, they stormed the bloody castle to the tune of one of my favorite songs in any 80s movie, ever: “Wake Up the Neighborhood” by Holland. Mostly because it starts with the line “You bring the Jack/I’ll bring the Coke/We’re gonna rock until this place goes up in smoke/Neighborhood, Wake up the neighborhood!” Then it goes on to say “The only way we’re gonna get back home is crawl.”

How was this song not a hit?

Poor Jeffy, big brother to Shannon Doherty and BFF to Jonathan Silverman. Do I know his real name? No. But he was all John Cougary. John Cougar Mellencampy. John Campy. And he was hella poor, and his dad worked for BrattyDeb’s dad. Le sigh. (Ref: “Some Kind of Wonderful” and “Pretty in Pink”)

6. One understanding parent and one strict one

Daddy was a Marine; Mom is a silent-but-strong type who doesn’t support anyone until way too late in the movie. Is it Footloose? Close enough.

I know the judge is not Kevin Spacey. But it should be.

BOTH protagonists have wacky friends in this case, but please, let’s us focus on Helen Hunt, who would go on to win an Oscar for a movie in which, as far as I could tell, she didn’t do anything but a bad Brooklyn accent. But in GJWTHF, she sang “The Banana Boat” song during choir practice, and Velcro’d her plaid uniform skirt inside out so it was all furry-mini. Don’t worry about how damned hot that skirt would be if she actually wore it; the important thing is, she did. To babysitting.

See “Private School” for reference. In GJWTHF, it was giant bull-dyke aerobics instructors lifting a car.

See “Square Pegs,” “Flight of the Navigator, “Footloose,” and every other movie in the 80s for reference. But this is the only one where we get to see her body double to a front handspring.

The most important thing, though, is that they get into dance contest on time, and they win it in a dance-off (tied with the BrattyDeb, of course). The mystifyer here, though, is how they managed to win. They’re terrible. They tumble some, sure, but they’re really, really terrible. Watch the first video again if you don’t believe me. And then get happy, anyway, when BrattyDeb’s Silver-Haired Daddy totally disses BrattyDeb just because she loses. With parents like that, who wouldn’t turn out well?

Honorable mentions for 80s movies that this movie also includes: Identical twins; Velcro; private school; and climbing out a window.