First: if you’ve never read William Goldman’s The Princess Bride: S.Morgenstern’s Classic Tale of True Love and High Adventure, stop reading this, go buy it, read it, and then return to this post.

We’ve all seen the movie, of course. We love it. Quoth we from it frequently and well, and likely not even realizing that we’re doing it anymore because it’s just what we say. We all love the Vizzini scene. (I have a theory that iocane is actually an inhaled poison, and he was dead before he took a drink.) We all think of the bishop when we go to weddings. We all know a little head-jiggle’s not going to make almost-dead Wesley happy.

Blah, blah, blah. I’m not listing those scenes. You know those scenes. Think of this post a s a longtime viewer’s companion: a guide to the stuff you didn’t notice until the twelfth, or twenty-fourth, or twelfth-squared viewing. Every movie should be good enough to warrant  a second viewing, because in the first viewing, you’re only getting the plot points and the highlights. Second viewing, you’re enjoying the dialogue.

By the 144th viewing, though, you should still find something new. (I only recently just noticed that Peter Venkman gets the crap scared out of him by the hotel manager when they go to catch Slimer. Hilarious.) So here are my favorite moments that it took 50+ viewings to find; please add your favorites in the comments. And if it involves a line about storming the castle, it doesn’t count.

5. The Cliffs of Insanity tableau.

I noticed this probably some time during my freshman year of college, while I was taking Intro to Film and knew words like “tableau.” I’m not a huge film geek anymore, but this particular scene is so beautifully constructed that I have to mention it every time, thus annoying my husband every time we watch it. 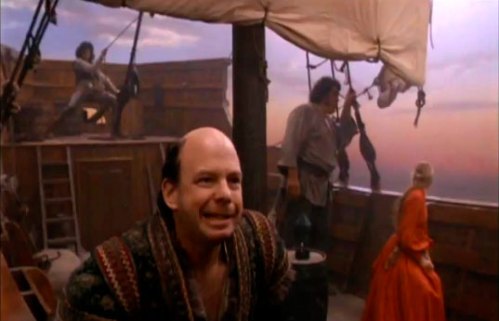 It’s not the way they look bedraggled and beat to hell, although that’s part of it. It’s also not entirely Wesley’s WTF look at Buttercup when she’s pleading for his life, although that goes in, too, along with his sidelong glance at Count Rogan. It’s also not “We are men of action. Lies do not become us.” Rather, this is one of only two times where we see Count Rogan have an emotional reaction: when Wesley mentions that he has six fingers on his right hand, Count Rogan’s eye twitches and then he clocks him soundly on the head.

It could be because he was going to shut him up that way, anyway, but I prefer to think that of all the things you could say or do to Count Rogan, you never, EVER mention the sixth finger. Like EVER. And the reason he killed Senõr Montoya was not so he couldn’t pay him, but because Senõr Montoya said, “This is the sword I made you for your six-fingered hand.” And Rogan was all, “WHAT did you say?” *stab*

Sidenote here: Christopher Guest is brilliant in many ways, but he’s most brilliant as a chameleon. It wasn’t until college that I bothered to look at the credits and realized he was actually Count Rogan. He’s unrecognizable as anyone.

It’s not a moment, sure. It’s a scene. But it starts with Inigo recognizing Fezzik because of the size of his hand–which totally makes sense, because Inigo is a swordsman, and he would probably recognize someone’s hand before anything else on their person. It moves on to Inigo counting on his fingers; he’s brilliant, but not very smart, as he’s already told us himself.

And then he says “There will be blood tonight!” Which is rousing, to say the least, but also kind of funny, considering Inigo’s recent lookalike.

2. Inigo Slays Ass in the Hallway.

This was a scene I never fully appreciated until I read the book, because the book’s line is utterly brilliant (and I hope I’m not misquoting): The fourth was dead before the first hit the floor. And by gum, that’s what Rob Reiner filmed. Unfortunately, I couldn’t find any YouTube clips that didn’t involve The Man in Black or Count Rogan, so you’ll just have to watch it again.

That’s it. That’s all. Count Rogan’s first name is Tyrone. You can’t beat that with a stick of iocane.

Comments are welcome, as always.

3 responses to “The Princess Bride: The Good Parts Version”