The Search is Over: RIP Jimi Jamison

Over a decade ago, Spiegelmama and I went to see the Reo Speedwagon, Styx, Survivor mega-concert At Mandalay Bay in Vegas because when you get the chance to see The Speedwagon…you grab it! Before the concert, all we could talk about was Reo and Styx. After, all we could talk about was Survivor. Oh, and also, how young Dennis DeYoung’s replacement was, and how we didn’t notice until he vaulted over the keyboard, but mostly we talked about Survivor and how many hits they had and how we knew the words to all of them. (As tweens, we’d even written a parody song of The Search is Over called The Weekend’s Over: every Monday’s bringing me back to school!)

That’s why I was so sad when I found out that one of their lead singers*, Jimi Jamison, died yesterday at 63. I’m sure he was a good guy a la the plot of the video for The Search is Over. A sexy woman thrashes in her bed while her boyfriend walks around thinking about the skeevier moments in their relationship, then arrives just before she thrashes onto the floor and gives her a platonic tender hug.

You might have noticed a few things. First, Jimi was world class hugger. 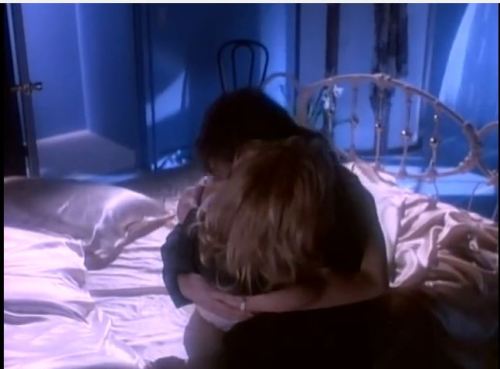 You might also have noticed that Survivor shoe-horned the entire band into their videos way before The Foo Fighters and No Doubt did it. Did you notice something else? The skeeviness I mentioned earlier? A little? Maybe. Well, wait until you watch The Search is Over.

Things you to keep in mind as you watch:

3. The girl in this video, Lee Ann Marie, was a trained dancer who performed with Ann Fucking Reinking and was one of the Danke Shoen girls Ferris sings to on the float. She claims that the director of the video didn’t know that she was a dancer until she busted out her Staying Alive-esque Aisle-walk dance (about a minute in). If that is true, then why did he not notice her Dance Face at 54 seconds? Pay attention, Chicago-based 80s video director. 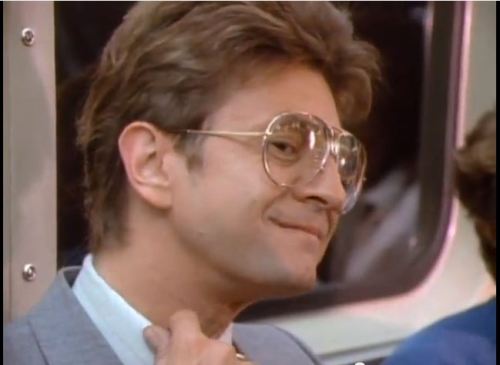 Getting hot under the old collar.

Look, I know he is a band member and not an actor, but his performance as Business Perv is so creepily accurate, it makes me wonder if he’s doing too much acting…or too little! Either way, that’ll be seeping into my nightmares tonight.

5. A man has died people! Let’s show a little reverence.

*Survivor had two completely interchangeable lead singers…just like Kids Incorporated. They are now down to one. Sad trombone.