David Bowie of the 80s and Jazzin’ for Blue Jean, the Longform Video

In my 9th grade art class, I learned two things: how to draw a portrait using a grid, and that I sucked at art. I drew two portraits, one of Paul McCartney and one of David Bowie. I hated the McCartney one because I’d made one eye bigger than the other (a horrible premonition of my first passport photo?), but when I made a mistake on the Bowie one, I just just added a bunch of colorful abstract squiggles a la his Blue Jean makeup, and it came out looking cool. So cool I put it on my wall and kept it there until I felt silly for having one of my drawings up on the wall despite my suckiness as an artist.

When I first found out that David Bowie was not immortal, I thought of two things. The first was that drawing and the second was an article I’d read about the critical atmosphere around Bowie in the 80s. I can’t find the article, as it’s lost to the ephemera of the Internet, but the gist is as follows: In the 80s, music critics had accused, either outright or by insinuation,  Bowie of being a sell-out, sold to the shallow materialism of the decade: his lemon-haired, slick-suited Modern Love persona held up as proof. However, the writer (whose name, publication and/or serial number is also lost to the ephemera) claimed that with hindsight, it could be said that the 80s hadn’t claimed Bowie; Bowie had claimed the 80s. He wasn’t changed by the decade; he had become the decade and thus changed it. 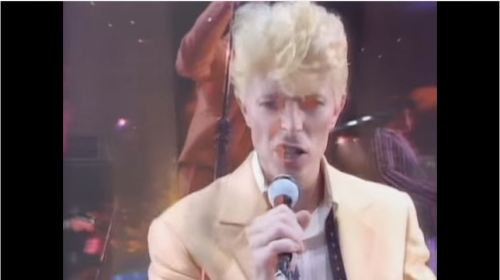 Now, thinking about the bizarre, deft way in which Bowie lived his entire life, including his untimely death, as both a life both well-lived and as one long piece of performance art, I get it. Bowie was, and still is art. Bowie the artist, Bowie the man, even Bowie the skewed image drawn by a 14 year old girl with public-school issued pencils and craypas: all of it IS art. And while I sympathize with critics of the 80s who were so ready to write Bowie off as a washed-up sell-out, I think they should have been more hip to the art he had become while critiquing the artist he was.

Take Jazzin’ for Blue Jean, the longform version of Bowie’s Blue Jean. It begins with Working-Class Bowie standing high above the street, putting up a poster of his alter-ego, Screamin Lord Byron, and ends inside a metal-screened elevator, rising ever higher above a broken-fourth-wall scene: higher and higher, but still caged, like Bowie’s career, caged in by the 80s even as it rose above it. Watch the video for yourself and pay close attention to the part where lovable loser, Working Class Bowie tries on a series of 80s fashions before finally settling on borrowing a slick suit from his well-dressed flatmate.