Stop me if you’ve heard this one. You’re watching a movie, and enjoying all the trappings that come with it–dialogue, characters, explosions, bared breasts, bras exploding off of bare breasts*.  Suddenly, everything comes to a screeching halt so that someone can tell a joke, and you just have to sit there, like a shnook, and wait for the punchline. Here are the best jokes from left field (or jflf).

This one doesn’t seem to belong on this list. It’s not really a SPM, and it doesn’t really fit the theme because I don’t think this joke was in the script. I just think that Tarantino wandered onto the set drunk and kept the footage because he liked the way his hair looked. But whatever. It’s a pretty funny joke.

9. What About Bob? I’m a Schizophrenic.

This one has it all. Bill Murray enthralling a room of people, Richard Dreyfus pulling his hair out in a fit of rage, and a classically hilarious joke.

8. The Crow. Jesus Walks Into an Inn.

I’m braving any bad juju that might be coming my way, as well as the wrath of time-travelling 90s goths, by listing this one, and I’m scared. Scared bad. But I must. Not because this is such a great joke, but it’s how the joke is told.  Just watch.

7. Stripes. Why Did The Chicken Cross the Road?

I was going to disqualify this one for breaking the mold, but then I realized it needed to be included for that very same reason.

How did Tarantino make this list twice? Look. This is a bad joke, and it’s about a very unsettling subject–the horrors of baby tomato abuse. But you know what? It fits the scene more perfectly than “hey, thanks for re-starting my heart” would have. (BTW: My two favorite things in this scene are Uma’s eyes and the weird lawn sculpture that appears to be judging them both and the joke.)

This is the reason I like this movie. Because Ben Affleck’s Chuckie is 100% spot on. See, when anyone who was born within a fifty mile radius of Boston tells a joke, they follow three rules. It has to be told like it is the truth, but happened to a friend or, even better, a cousin. It has to be unnecessarily long. It has to include a cat (preferably a dead one).  Chuckie’s story joke hit all three marks. (My long-form story joke included a dead dog, but it was a very small dog, so they let me stay in the state.)

In a pitch perfect Boston accent, Chuckie enthralls and annoys his friends with a long, drawn out story about how his cousin hits a cat with a car, chases the dying cat across the street, and puts the cat out of its misery. A large man asks why he is bashing his cat’s head in and Chuckie’s cousin explains the whole story and points at the hood of his car…which has a dead cat stuck to the grille. The punchline: Can you believe it? He brained an innocent cat.

4. The Best Little Whorehouse in Texas. You Know What Frosts My Ass?

Just in case we needed more proof that big boobs and adorable accents make everything, even bad jokes, better. 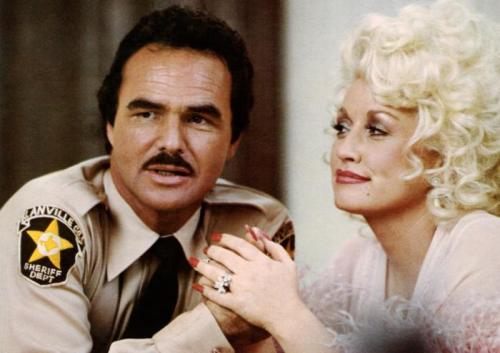 Dolly: You know what really frosts my ass?

Dolly: An ice cube about this high. (Indicates Dolly-ass height.)

3. My Favorite Year. The Duck Joke.

This one makes the cut because of Jessica Harper’s charm, Benji’s reaction, just what an AWESOME movie My Favorite Year is, and the fact that the bad version of the joke is way funnier than the professionally told version. Take that, Stoneberg.

A man walks into a psychiatrist’s office wearing a duck, and he says, “Can you help me because I have a duck on my head?”

2. History of the Word Part 1. Dying at the Palace.

So this is technically a comedy routine, but it is a comedy routine full of jokes. Funny ones. Delivered by Mel Brooks. To Dom DeLuise. With Madeline Khan and Gregory Hines chuckling along. What else do you want?

The only thing we Romans don’t have a god for is premature ejaculation, but I hear that’s coming quickly. Ba dum bump.

This is number one, and do you know why? Because of you, Lerlines. Because when I told you what this post was about, this joke sprung to mind, and if it didn’t it should have. It’s a naked lady with a poodle. Be warned. This joke does not have a punchline. Deal with it.

*This only applies for the brasploition epic, Zapped!