Don’t listen to the devil on your shoulder

In light of Jody‘s post about the terror-inducing level of sexual menace and violation in the light-hearted romp Revenge of the Nerds (1984), I wanted to present an even funnier movie that managed to be balls-out without being quite so rapey: Animal House. 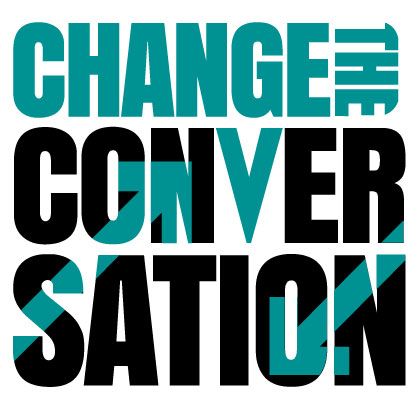 Yes, National Lampoon’s Animal House (1978), that paean to the frat house, manages to slip in some subtle messages about how not to rape people amid the moral turpitude. This is the scene that has been playing in my head since the Steubenville trial. (Warning: lots of cussing and some boobies.)

Even blindingly drunk, Pinto (Tom Hulce) realizes that if Clorette (Sarah Holcomb), the beautiful, topless girl in his bed, is incapable of speaking, she has not consented to sex. In his battle of conscience, he chooses to do as near to the right thing he can manage, which is to wheel her home unmolested in a grocery cart and leave her at her front door — even ringing the doorbell to make sure she gets inside. His reward is a more rewarding, sober experience later. Sure, it’s still rapey because the girl’s character is only 13, but an 18-year-old having agreed-upon intercourse with a 13-year-old (especially because he didn’t know her age until afterward) is much less heinous than having intercourse with a passed-out girl of the same age.

Shindancer pointed out another excellent example of sexual justice in Animal House. Bluto (John Belushi) sees Mandy (Mary Louise Weller) come home from a date and decides to try to catch her undressing. He gets a ladder and does manage to see some topless pillow-fighting and the object of his obsession taking off her bra.  However, before she really goes for the gold, the ladder fails Bluto and brings him crashing to earth. (Again, lots of boobies.)

Posted in Animal House, Let's Drink, Revenge of the Nerds

Changing the Conversation: The Rape of Betty Childs

You’ve likely noticed, Lerlines, that once in a great while we get all ticked off ’round here. Royally pissed off, even. So when I read that Pittsburgh bloggers are devoting April 16 to a day of blogging about sexual assault, I knew there’s only one thing worth talking about: Revenge of the Nerds. That’s right, folks. We’re changing the conversation, and it starts with the Tri-Lambs.

You know the story: using brains, wit and montage time travel, a group of nerds beat the jocks, get the girls, and even pledge into a fraternity of large, stern, sweater-wearing bodyguards who are accompanied, at all times, by a funky bass riff. We shall embrace our nerdiness, and we shall overcome.

By the way, on the path to glory, we’ll also be creepy stalkers and rape a girl.

Yes, it’s true, folks: Lewis, indefatigable king of the nerds, does not woo and seduce Betty Childs. He does not use his charm and devotion to make her see that love isn’t all about buff muscles and a handsome face, perhaps because he has neither charm nor devotion. He doesn’t realize after the first few failed attempts that Betty Childs is a shallow brat who isn’t worth his time, perhaps because he, too, is a shallow brat who isn’t worth her time. He doesn’t stop pursuing the beautiful, blonde Betty Childs when she and her boyfriend let pigs loose into his house, wrecking a perfectly fine pot party and making fun of another sorority in the meantime. 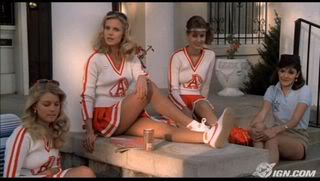 She’s a cheerleader and in a sorority, which means stalking is legal.

Betty is not attracted to him. She doesn’t want him, and by all accounts, never will. And yet: Lewis will not give up.

No, instead of giving up–he’s got a heart as big as all get-out, I tellya!–he and his friends stage a panty raid on her sorority house. For the under-30 set reading this, a panty raid is an old-fashioned way for frat boys to invade the home of sorority girls, and steal their panties while they’re at it. In the grand scheme of things, it could be called home invasion, burglary and generally be creepy, but in the context of hormonal, likely drunk teenagers living away from parental guidance, well, as long as the panties are clean and stolen from drawers, not behinds, not much harm done. 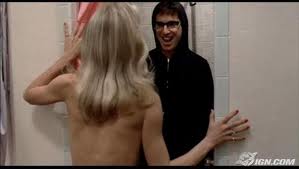 Why on earth does she say no this to guy?

Unless, of course, the panty raid is a cover for installing video cameras in the bathrooms and bedrooms of said sorority girls, in which case: Ew. Yuck. Creeptastic.

But it’s OK, of course, because Betty Childs is a big ol’bitchy bitch, and her sorority sisters are, too, so we’re allowed to do things like stalk them from a satellite. Then again, maybe they do deserve it, after all, since one would think they’d be intelligent enough to notice the giant black camera lens poking out of their white, white ceiling? Hmm. Nope. Even stupid people–stupid mean people–don’t deserve to be stalked.

Fast forward through a number of other hijinks, and we’re at the big Homecoming fair, with drunk tricycle races and gay javelins, and the Nerds have a second revenge on the jocks and Betty Childs: They sell whipped cream pies for charity! And the pie is actually a Pi, get it? Because if you lick away all the whipped cream, Betty Childs is all topless and cheesecake right there on the bottom of the pie tin!

Not only have you been watching Betty Childs pee for the last month, but you also cropped out a picture of her and you’re now selling it. So add pornography sales!

But it’s for charity. And she’s a stupid meanie who just won’t stop saying no. I mean, WTFOMG. 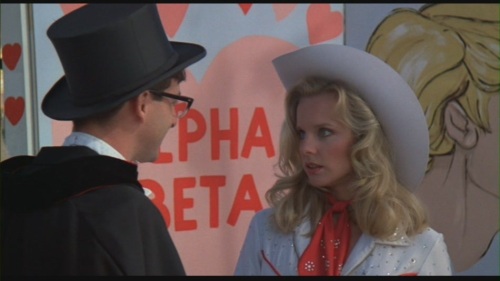 This is where she tells him no. Again.

Mere moments after this discovery, Lewis steals Betty’s boyfriend’s mask, and in another move that makes me wonder if maybe she didn’t forget to clean her contact lenses, she follows Lewis into the funhouse, leads him into the Moon room, and, Lewis still masked, they have lots of moon sex whilst a Martian watches.

After, she doesn’t mention his smaller hands or much thinner, shorter physique, but remarks on his incredible performance. And then he unmasks himself, revealing that Lewis, our hero, is a full-on rapist.

I’m sure he doesn’t think he’s a rapist. He just wants a chance to show Betty how good he really is, because sex and love aren’t about mutual attraction; no, love is about being forced to realize what you’ve been missing all this time. And she does, of course. She realizes and regrets all that great sex she’s been missing, and by the end of the evening, is even convinced she’s in love with the guy.

So what’s the lesson we learn from this, folks? How is the conversation changing? Well, on one hand we’ve got the big dumb jocks, who are big and dumb and vandalizers and, by all accounts, major assholes. We don’t ever see it happen, but I think we can assume one or two of them have coerced a girl into having sex, perhaps even forcibly. They’re Olympians among men, and therefore they get to go all Zeus on whatever girl happens to walk by. They’re your garden-variety date-raping frat boys.

On the other hand, we have the hero of our movie, a far more insidious kind of rapist. This is the guy who believes he deserves a conventionally beautiful woman, but by virtue of genetics and social skill deficiency, can’t seem to get one. And it’s not his fault, no way. He’s smart and his friends think he’s funny. If she just got to know him better, she’d see. Really, she would. And the fact that she’s mean, well, sure that’s embittering, since he’s entitled to so much more. Entitled to as much as any other Greek god, really.

So, really, what’s the fucking problem, Betty Childs? Why are you such a bitch, you shallow cheerleader? Why can’t you be my trophy wife, instead of his? I love you because you’re beautiful and you don’t love me because I’m not, which makes you a bitch and me persecuted. So what’s wrong with transforming into a swan to get a little something-something? And see: you liked it. You said you wouldn’t like it and you DID, so I win. 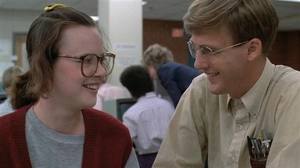 Judy will be so disappointed in you, Gilbert.

“All nerds think about is sex,” Lewis says, and judging by the library of videotapes of your bare ass, Betty, you can bet he’s not kidding. I just wonder how you’ll react when he takes you back to the Lambda house and all his brothers start remarking on that mole you have. But it’s OK: even if you dump Lewis, he knows the right way to treat a girl. Stalking and raping works!

Crap. Now I’m depressed. But I don’t have to be. Because I donated to the Change the Conversation fundraiser, which is raising money for the Pittsburgh Action Against Rape (PAAR), which provides support for survivors of sexual violence and sexual assault. You can donate, too.  Because sexual relationships should start with adorable computer hacking, not with panty raids, stalking and rape. 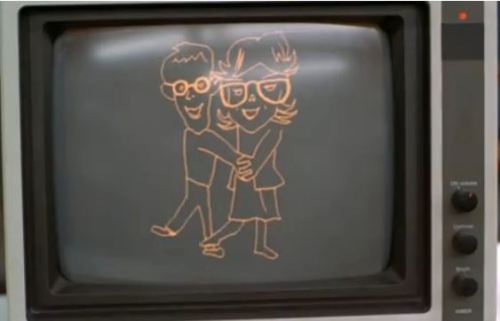 Why isn’t this on a t-shirt yet?

Posted in Freshman Film Blue Book, Revenge of the Nerds