Yesterday was my youngest daughter’s birthday–the little peanut’s two!–and so today I wanted to share a birthday scene. I could’ve gone with “Sixteen Candles,” or any number of other teen party scenes, but this was the first thing that came to mind: Cowboy Gil from Parenthood (the 1989 version, not the Gilmore Girls version). 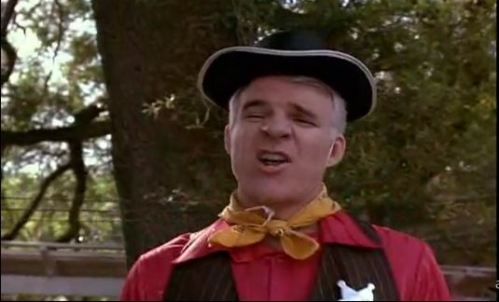 It has a number of things going for it:

Really, though, the best part of this scene is that, to me, it perfectly demonstrates how feeling silly is its own parental reward.

I couldn’t find the whole clip ANYWHERE on YouTube, so I have to send you over to a site called AnyClip. They won’t let me embed the clip, and it doesn’t show all the balloon animals, or him riding away on a horse, leaping over the neighbor’s shrubbery. But next time this is on cable, catch the whole movie. It’s worth watching for this scene and to see Keanu Reeves ask Dianne Wiest if she knows what a boner is.